Development of Stone Fruit Production in SA - an overview

Development of irrigation at Renmark by the Chaffey Brothers from 1878 initiated stone fruit production in the Riverland (referred to as the Upper Murray until the 1950s). Irrigation expanded rapidly between 1900 and WW1, and post WW2 as new irrigation districts were developed.

Post WW1 saw rapid expansion of dried fruit production and exports (over 170,000 boxes of dried fruit in 1921–22). The development of Soldier Settlement orchards in the Riverland fostered expansion of fruit and vine plantings. The Berri Experimental Orchard played a key role in providing training programs for returning WW1 servicemen. 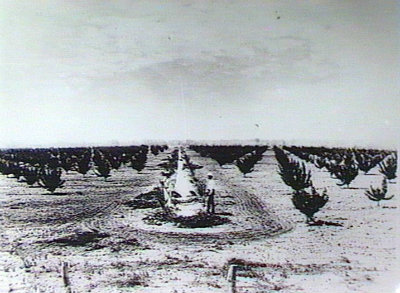 Expansion of South Australia’s railway network enabled movement of fresh stone fruit from regional centres to Adelaide, and provided access to Melbourne and Sydney markets. Railways were also vital for transporting fruit from the Riverland to Adelaide based canneries and jam manufacturers in the 1920s and 1930s. The introduction of refrigerated cool storage enabled expansion of the traditional summer fresh fruit marketing season.  Access to Sydney and Melbourne markets was further enhanced by the advent of faster refrigerated road transport in the 1970s.

The Barossa Valley was a major apricot production district until the late 1960s, mainly for dried apricots. However being dependent on natural rainfall, the Barossa district declined as growers had increasing difficulty competing with higher and more reliable yields delivered by irrigated orchards in the Riverland districts.

The Clare Valley was connected by rail to the main mining town of Broken Hill, thus offering a major market for these fresh fruit growers. Development of refrigerated road transport systems hastened decline of stone fruit production in the Clare Valley and Wirrabara districts.

Suitable climate, development of irrigation networks, and investment in packing and processing infrastructure have resulted in approximately 90% of South Australia’s production of apricot, peach, nectarine, and plum production now being located in Riverland districts.

Cherries prefer a cooler climate, so the Adelaide Hills has remained the main cherry production district in South Australia with more than 90% of plantings. Some early and late season cherry production has been located in the Riverland and South East.