Fall armyworm detected in North Queensland – what it means for SA

Exotic pest fall armyworm (FAW), Spodoptera frugiperda, has been detected in two locations in northern Queensland on a maize crop in February 2020. The National Consultative Committee on Emergency Plant Pests has declared that it is not technically feasible to eradicate FAW from Australia and it is now considered established.

FAW originates from the tropical and sub-tropical areas of the Americas and has been spreading across much of Africa and southern Asia since the first report in Africa 2016. FAW is a polyphagous pest and shows preferences for the Poaceae, most commonly record from wild and cultivated grasses; from maize, rice sorghum and sugarcane.

Is FAW a risk for SA?

Whilst FAW is a highly mobile insect, capable of long distance flights, the risk depends on the spread of the insect across the continent. CLIMEX modelling for FAW (du Plessis et al, 2018) predicts that SA’s climate is only suitable for low population growth (Figure 1.), with a Growth Index (G.I.) of approximately 1 generation. In the United States FAW is mostly a seasonal migratory pest, which is a good indication for the potential threat to S.A. (see Figure 1. For comparison of G.I.).

As FAW is a tropical to sub-tropical pest which does not do well in the cold it is unlikely that it will be a serious pest for winter cropping in S.A.

How can we prepare for SA?

Report any unusual sightings of caterpillars. At a glance FAW looks similar to other armyworm species and caterpillars that grow to a similar size (30-40mm), such as budworms and cutworms. Large FAW can be identified by an inverted ‘Y’ shape on head capsule and four raised spots in a square at the rear (Figure 2).

See PestFacts Issue 9 2019 for more information on how to pack and send insect specimens. The more individuals the better, we recommend at least 20 if possible. Please note that cannibalism is common for FAW so if sending more than one individual, provide a food source in the container with scrunched paper towel to drain moisture, stop mould growing and provide shelter. Put specimens in non-crushable container, or in a cardboard box and use express post at the start of the week.

We will monitor the spread of FAW closely through the existing monitoring networks and keep you updated. Currently, no further action is necessary. 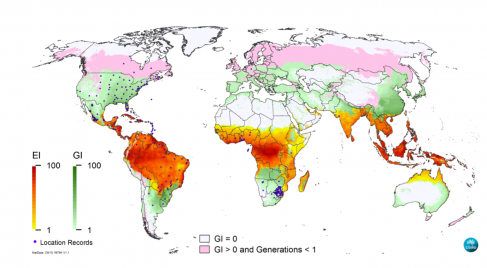 Figure 2. Fall armyworm characteristics include the inverted ‘Y’ on head capsule and four raised spots in a square at the rear. (Source: Russ Ottens, University of Georgia, Bugwood.org (modified by The Beatsheet.)