As Adelaide's urban areas expanded in the 1920s and 1930s, the almond industry became concentrated in the western suburbs (especially  around the Marion, Edwardstown, Brighton areas), and developed in the Willunga  and Southern Vales districts. Plantings subsequently expanded on the Northern Adelaide Plains (Virginia, Two Wells, Angle Vale) in the 1960s and 1970s, and then into the Riverland and Murray Valley areas. 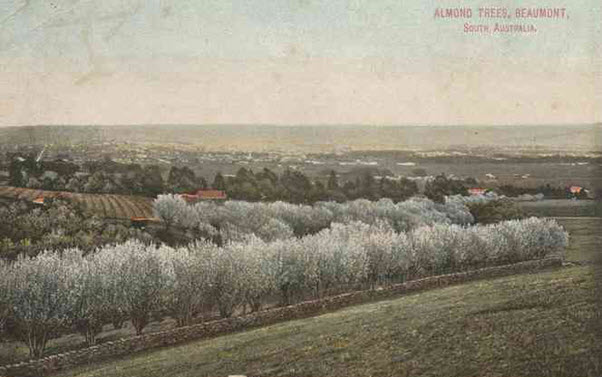 This 336 page book written by Jennifer Wilkinson is titled Almonds in Australia – From pioneer  planting to prime production.  It costs $35 and provides information about development of the almond industry over 100 years, and the role of growers, processors, marketers, nurserymen and  researchers in development of the industry.

This comprehensive book chronicles the endeavours of those that have shaped today's vibrant almond industry. It covers the history of almond production in Australia from the first plantings through to and including 1995 when the first  national industry body was formed, the Australian Almond Growers Association.

Jennifer Wilkinson is the editor of the Australian Nut Industries journal 'Australian Nutgrower', and has authored 6 related books including Nut Growers Guide.

Almond Board of Australia

The Almond Board of Australia also provides a wide array of information about Australia's almond industry on their comprehensive website.

Prepared by Barry Philip with assistance from the author of  Almonds in Australia – From pioneer planting to prime production, Jennifer Wilkinson