A wide range of pruning experiments were conducted at Blackwood Experimental Orchard from its establishment in 1905 through until the late 1920s.  Information from these trials was collated by Mr George Quinn (Horticulture Instructor, Chief Inspector of Fruit and ultimately Chief Horticulturalist).  He produced an initial leaflet on pruning in 1900, and this was ultimately developed into the 268 page “Fruit tree and grapevine pruning; a handbook for fruit and vine growers, working under the climatic and economic conditions prevailing in temperate Australia”, with the final 13th edition being published by Robertson and Mullins (Melbourne) in 1947.

George Quinn became recognised as a national specialist in fruit tree pruning.  He ran many demonstrations and pruning competitions across South Australia’s fruit growing districts up until his retirement in 1935. 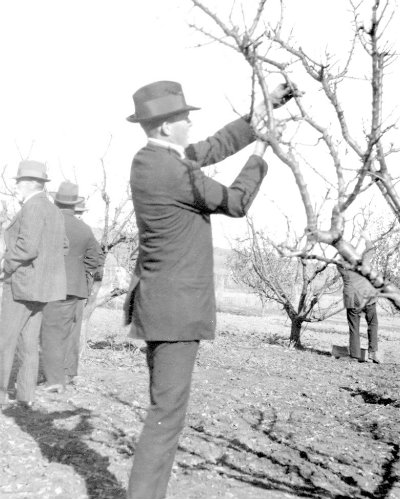 David Kilpatrick undertook a major study of fruit production in the United States, Canada, and the United Kingdom in 1963. He then updated George Quinn’s pruning information in the late 1960s and delivered a pruning extension program comprising:

A further detailed publication on pruning and training for commercial peach and apricot orchards was prepared by Ian Bond and Frank Gathercole in 1972 (Pruning and Training Peaches and Apricots Extension Bulletin 13/72).

Tatura and MIA Trellis for Peaches and Apricots

Through the 1960s and 1970s, a series of trellis systems were developed for improving productivity and fruit quality of peaches. The most significant were the MIA and Tatura trellis systems developed by the Victorian Department of Agriculture at its Tatura Research Centre in the Goulburn Valley.

A demonstration Tatura trellis area was established at Loxton Research Centre (40 trees X 4 varieties of canning peaches) in 1970, and Victorian expert Bas van den Ende was brought to South Australia to run a series of demonstration field days for orchardists.

These trellis systems were not widely adopted by Riverland orchardists.  Simarloo and several fresh peach growers in the Pike River district subsequently invested in these systems.

A close planted orchard design is currently being used at Loxton Research Centre for assessment of new apricot varieties emerging from the breeding program.  It offers potential to increase productivity, significantly reduce harvest labour costs, and improve competitiveness of the dried apricot industry.

The Lenswood System for cherry production was developed at Lenswood Research Centre by a team of researchers between the 1970s and 1990s.  It used a combination of:

Significant investment was required to provide bird netting, tree trellising, higher density tree plantings, and under tree irrigation systems.  The outcome was an increase of cherry yields from approximately 5 t/ha to over 20 t/ha, while the elimination of ladders in the harvest process halved per kg harvest labour costs.  Despite the high capital cost per hectare, the Lenswood System improved cherry yields, quality and profitability significantly, and was been adopted by cherry growers nationally.